The title of this post is followed by a question mark. That is because what follows is not a statement of fact but a puzzle that I have been mulling over in my head since a photograph was published early last year. I do fervently hope the authors of the paper will forgive me for not citing the picture directly, the full citation can be found at the end of this post. I do this only because I want to lead off with a mystery. 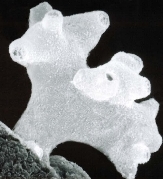 Can you guess the phylum?

Look at this picture. What do you see? Without scales, context, or attribution, many of my fried friends have responded that it is some type of coral (cnidaria), maybe a tunicate (chordata), but the vast majority have interpreted this image as that of some form of sponge (porifera). Indeed, this object does bear a remarkable similarity to a leuconoid sponge.

And that is where evolutionary questions get interesting. 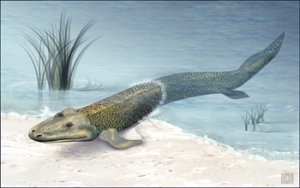 Fungi were among the first eukaryotes to leave the warm embrace of the sea and venture onto land, and they have become supremely adapted to it. They paved the way for the emergence of terrestrial plants, and the deep symbioses between plants and fungi were already well formed long before animals surrendered their gills. The classic image of a fish emerging from the sea onto a barren mudflat, its fins already the rudiments of legs, ignores the fact that life was already flourishing on land. Animals were fashionably late on the scene.

Despite common misconceptions, fungi are not plants. They form their own monophyletic kingdom, the kingdom Fungi. However, fungi and plants are still more often than not linked together in primary school and college biology courses. Many universities still lump mycology in with the Botany department. In a lot of ways this is a rational choice, because the interactions between fungi and plants are one of, if not the, most important driving force in ecology.

But a phylogeneticist will tell you that Mycology would better be served taught alongside Zoology. Fungi and Animalia form a single clade called Opisthokonta, meaning “tail-behind” for the single flagella that their earliest ancestors possessed. Fungi and Animals share a motile, flagellated common ancestor. A common ancestor that looks surprisingly like a choanoflagellate. This shared, protistan ancestor plied the aqueous world more than 460 million years ago. Should it then be a shock that the most basal fungi and the most basal animals are defined by flagellated cells (choancytes in animals, chytrids in fungi)?

Sponges use their choanocytes to move water through their bodies. The beating flagella are very much the sponge’s hearts. Along with moving water, each choanocyte has a collar around its flagella which captures food particles. These food particles are then collected by amoeboid cells and digested to power the sponge. Elegant, beautiful, and simple, this is likely how the first multicellular animal collected its food.

Chytrids, on the other hand, use their flagella for motility. Both the gametes and the spores of chytrids possess flagella, and as such, most chytrids survive in aqueous habitats. For an in depth look and some wonderful chytrid pictures, visit Chytrid Fungi Online.

This particular group of chytrids, members of a recently created order  – Rhizophydiales – are found in marshes along a lake in Patagonia. The area it was recovered from is described as oligotrophic . Of course, the deep sea was once called oligotrophic as well, and I’m of the opinion that if you can’t find life everywhere on this planet, you’re not looking hard enough. Regardless, Patagonian lakes could certainly be considered extreme environments, and the presence of fungi there is yet another reason why I think we’ll find them in the deep sea as well.

There is currently no evidence to suggest that this superficial appearance of the above chytrid and leuconoid sponges is anything more than coincidental. The first image, which appeared on the front cover of Mycologia, struck me when I saw it because of how similar the features were.  If this is truly a case of convergent evolution, it could be tested. The beauty of evolutionary theory is that it can be tested. We can look at this superficial resemblance between the most basal fungal lineage and the most basal animal lineage and hypothesize that perhaps these two kingdoms share a border. Perhaps there is a common ancestor to both groups that resembles this most basic form of each.

As it turns out, there is.