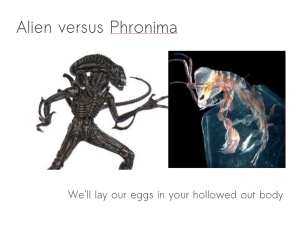 I have a long standing bet with my father that goes something like this: you show me any fantastical creature from science fiction, and I’ll show you something from the natural world that makes your alien look like a care-bear. Basically, it’s the old truth-is-stranger-than-fiction idiom. This held up through “Alien”, “Predator”, “Starship Troopers”, “Star Wars I, II, III, IV, V, and VI” and a host of other great and not-so-great science fiction adventures. When I heard about “Avatar”, the awe inspiring special effects, the bizarre reports of people being depressed after seeing it, and the incredible description of a totally new world, I though I had finally lost that bet.

Sure “Avatar” is an amazing visual achievement (but see here, here, and here for some deeper discussions of the flawed narrative).

And yes, Pandora is an amazing world filled with incredible creatures, but it’s nothing you couldn’t find right here on Earth. As in all science fiction, the creatures are either taken whole cloth from our own native fauna or pieced together from multiple earthly beasts to create that otherworldly feel.

Starting off with the easy ones – there’s nothing that brilliant about giving recognizable creatures and extra pair of legs, or sticking their nostrils somewhere else, or adding another set of eyes. The “horses” (they even called them horses) are just six-legged horses with anteater heads.

Even the big flying dragon things resemble conventional birds with an extra set of wings and a little more span. A cassowary on steroids is a pretty scary sight, but it’s not out-of-this world. Even the fiercesome reptilian faces weren’t anything new. I’ve had pets that look like that. 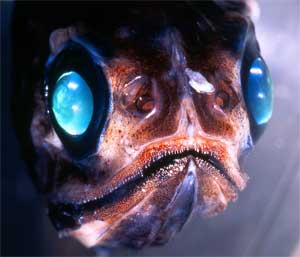 And it should go without saying that making a person ten feet tall and blue doesn’t immediately scream alien, either.

But those were the obvious ones, the ones that make you say, ‘cool, that’s what a hammerhead rhino would look like.’ Those are the bread-and-butter creatures of all science fiction. They make you feel like you’re on another world without being so strange that you have no frame of reference. We all knew that the wolf-looking creatures would act like wolves, that the horse-creatures would be ridden like horses, that the hammer-rhinos would charge. You need that reference frame in order to follow the story.

It’s the details that let the director experiment with the truly bizarre. Those little touches that are not key to the central story, so you don’t need to have a full reference frame. That’s where you get to invent really weird stuff, right?

As the hero walks through the forest of Pandora for the first time, we see some familiar sites. Most of the plant life is common, it’s back-drop not meant to distract us from the story. The first bizarre bit that crosses our eyes, the first plant that pops out in front of the action in 3D, is a very common fiddle-head fern, supersized but unmistakable.

Continuing on, the foil for this botanical exploration discovers some strange plants, beautiful spiral flowers emerging from a small trunk. Upon touching them, the entire structure retreats into the trunk and the surrounding flowers follow suit. The only thing that puzzled me about these giant Spirobranchia spp. was why they weren’t nearly as colorful as the christmas-tree worms we find in oceans all over the world.

After an action-filled interlude, the scene quiets down and we find ourselves in a night setting filled with light. Light that emanates from all the plants, but seems to be strongest from some strange, heart-shaped leaves that look mysteriously like the common sea pansy. But Pandora’s terrestrial pansies light up the night, do ours as well? As a matter of fact, they do.

And if you walk the surf at night, after a diatom bloom, your footsteps will luminesce as well. 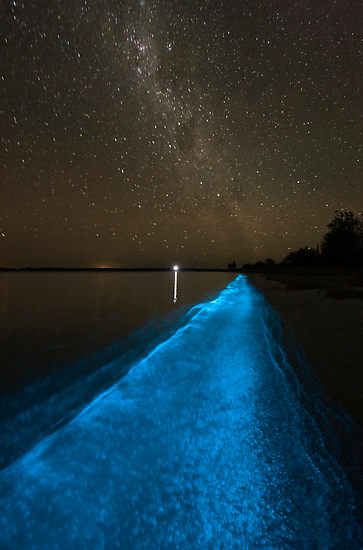 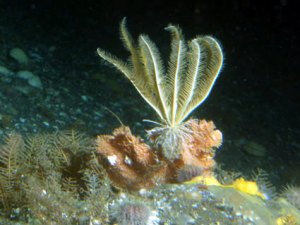 As our hero and his new friend wander through the forest, seeds alight on him, seeds that look eerily similar to crinoids, an ancient lineage of echinoderms still common in the ocean. Looking up after being covered in seeds, we see them surrounded by what can only be bioluminescent jellies hanging from the trees.

The pace of the movie picks up from there, and we no longer get a glimpse into the fine detail of the world created for this movie, but we do continue to see fragments of a rich and diverse ecosystem which closely mimics our own. The cloud forests of South America could easily stand in for the floating mountains. Caribbean Banyans would make a perfect proxy for the Tree of Souls. 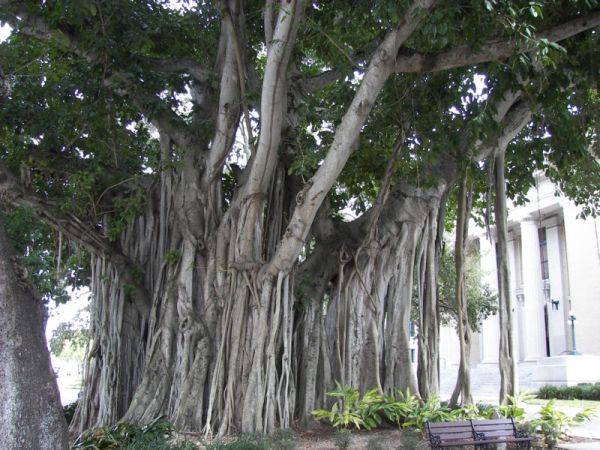 The truly spectacular creature is Pandora itself. The forest is connected by a vast network of conduits which connect every living thing. Connected in much the same way that Symphony of Science has described the universe: 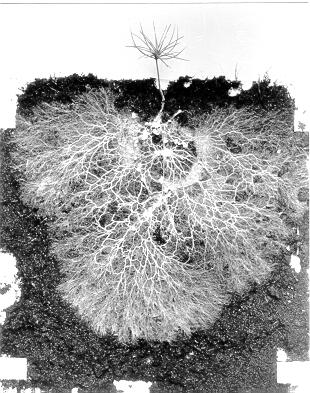 A network of mycelia connected to a root system

But if you want something a little more concrete than that, consider the vast mycelia network which connects entire forests together. Fungal mycelium, tiny strands which act as the root and the body of fungi, stretch out over hundreds of thousands of acres, covering the subsurface of an entire forest in a branching network. These mycelium act as roots, taking up nutrients, but also form symbiotic relationships with trees and other plants, fusing together and allowing nutrient exchange between plant and fungus. But even beyond that, recent studies have shown that this mycelial network can connect trees miles apart and allow the exchange of nutrients from one tree to the other. These networks can be shared across multiple species of tree and fungi allowing efficient exchange and providing a buffer for the forest when times are lean in one area. In many cases, these vast networks drive the forest ecosystem, essentially creating one multi-species super-organism.

I must confess to a bit of bias. James Cameron has a long history of work with the deep sea, so perhaps it takes a deep-sea biologist to see the inspiration for his creatures. There are ecosystems in the ocean that make Pandora look drab. Creatures so magnificent, so unbelievable, that the human imagination couldn’t even conceive of them until they were finally discovered.

The real point I’m trying to get at here is the Pandora is Earth. The fantastical creatures of Avatar can be found right here, in our forests and seas, on our coastlines and plains. You don’t need to travel to a fictional moon on the other side of the galaxy to find a world like Pandora waiting for you, it’s right here. There are creatures in this world more amazing than anything you’ll find in the movies. Places more diverse, more unbelievable, filled with new and wonderful organisms waiting to be discovered.