Sarah Keartes  is a science blogger studying marine biology and journalism at the University of Oregon. A self-proclaimed Attenborough wannabe, and all-around shark junkie, she is dedicated to exploring new tools to promote ocean outreach through science communication.

Second string. Almost famous. Runner up. We’ve all been there—bowed out gracefully and stuffed down the BAMF within. I’m talking the missed, the forgotten, the less-than-top dogs (or in this case, fish). Such was the fate of these ten water-dwellers, left looking up at the podium of last month’s “Top Ten Weirdest Fish in the World” list.

Just keep swimming my finned-friends, I’ve got you covered. They may not be the blobbiest, the toothiest, or the most menacing—but for these creatures, weird comes naturally. In their honor, it’s time for round two: the top ten weirder than the weirdest fish in the world list. 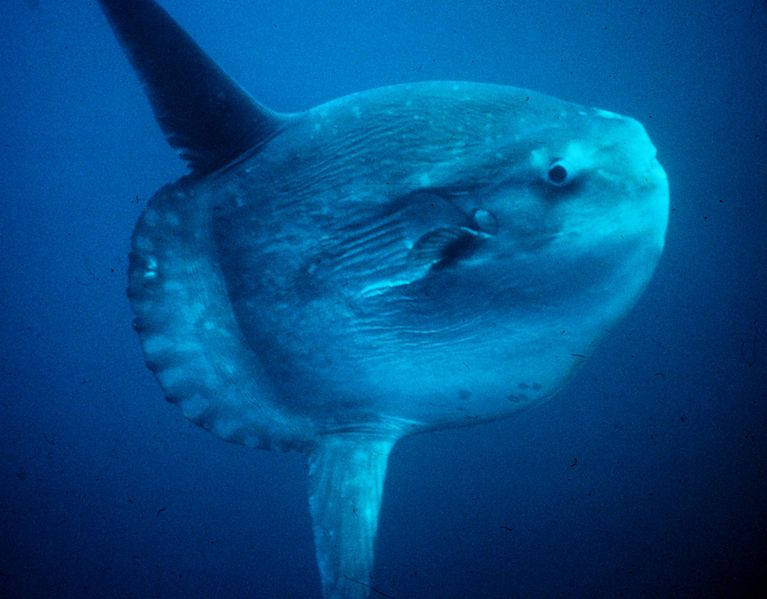 How this giant hunk of weird was left off of the list is a mystery. With large specimens reaching 14 feet vertically, and weighing over 5,000 pounds, the Ocean Sunfish (Mola mola) is the heaviest known bony fish in the world. Looking more like the Hindenburg than a pelagic fish, this scale-less giant is covered in a thick elastic skin that is known to host over 40 different parasites—so many, that some of their parasites have parasites.

Millions of babies, complete body overhaul, parasites for days, check. Not weird enough? Throw some beak on that fish. Sunfish use their fused beak along with powerful suction to manipulate prey items into manageable pieces, and let pharyngeal teeth, claw-like plates in their throats, do the chomping.

Oh, this old thing? It’s just my blade-like rostrum bearing 18-22 pairs of lateral teeth—no big deal. This one calls for a case of “WTF, evolution?” The pointed sawfish (Anoxypristis cuspidata), also known as the “knifetooth,” or “narrow” sawfish is one of the strangest-looking fish in the world. The teeth on its snout are not used for chewing, but rather as both a tracker, and a weapon.

The saw is covered in tiny ampullary pores, which allow the sawfish to pick up electrical fields produced by fish and other prey. Once located, that “saw” becomes a longsword used to stun and impale their targets.In fact, some species of sawfish can slash with enough force to completely sever their prey. Looks like the tiny jelly isn’t the only “Kingslayer” in the sea.

From the sword-wielding, to the dainty? Think again. Seahorses are in fact fish, and are in fact ninjas. Their genus name, Hippocampus stems from the greek word Hippos meaning “horse” and Campus meaning “sea-monster.” Okay, tiny horse-monsters, that’s simple enough—but there is nothing simple about them.

As far as strange adaptations go, seahorses are an evolutionary grab bag. Their eyes move independently, their long tubular snout allows them to go undetected when stalking their prey and a ventral pouch allows the males to give live birth. As if this wasn’t enough weird for one tiny fish, seahorses are hiding one more interesting adaptation in their prehensile monkey-tails: super-strength.

Seahorse tails are made up of thirty-six bony segments. Each segment is comprised of four L-shaped corner plates connected by small joints. When exposed to pressure, like for example, from the crushing beak of a sea turtle, these joints allow the bone plates to glide and pivot freely over one another without being damaged, much like a Hoberman Sphere. The bones in the tail can be compressed by nearly 60 percent of their original width before permanent damage occurs to the spinal column. Sorry, Tony Stark, seahorses wore Iron Man armor before it was cool. So hip.

As deep-sea fish go, the pacific barreleye (Macropinna microstoma) is pretty normal. It possesses many of the classic characteristics of a fish: scales, pectoral and caudal fins, transparent head, nostril-eyes—wait, what?

That’s right. This incredible deep-sea fish houses its head in a fluid-filled transparent shield. The dark spots you see above the fish’s mouth are actually capsules housing the fish’s olfactory organs, much like our nostrils. The real eyes, which are marked by green spherical lenses, are tremendously light sensitive, and protected by fluid within the shield.

These up-turned eyes allow the barreleye to pick up faint shadows overhead, but how then is it able to see prey in front of its mouth? Rotation. When the fish switches from a horizontal to vertical position, the eyes rotate within the shield and remain locked on the target, allowing it to pick out tiny prey, or as seen here, to avoid capture.

Any fish native to the Southern Ocean, one of the most extreme environments in the world, is destined to pack a bizarre punch. For the ocellated icefish (Chionodraco rastrospinosus), the punch comes in the form of transparent blood.

The fish’s blood lacks hemoglobin.  a protein found in the red blood cells of all other vertebrates. Hemoglobin not only gives oxygenated blood its red color, but works as an agent which carries and delivers oxygen to the muscles and organs that need it. The ocellated icefish is able to function without this important protein because at cold temperatures oxygen is dissolved more easily in the plasma (the liquid component of blood), which in turn is absorbed by the muscles. Essentially, it’s like skipping the middle man in the oxygenating process.

Icefish also have an impressive circulatory system which pumps blood at a rate five times faster than the average fish. This may contribute to the fish’s ability to survive without hemoglobin, but the origins of this strange trait remain a mystery.

“A fully-grown adult sheepshead will have well-defined incisors sitting at the front of the jaw, and molars set in three rows in the upper jaw and two rows in the lower jaw,” Sydney-based science writer Becky Crew said.

Like humans (and other omnivores), this combination of teeth allows the sheepshead fish (Archosargus probatocephalus) to feed on a multitude of different prey items throughout its development. This is especially helpful for a fish that freely moves from salt, to brackish, to fresh water. From slurping up worms, to crushing the shells of crustaceans, this fish is ready to nomnomnom in multiple habitats.

Speaking of fish that move from salt to fresh water, how about one that climbs walls using its mouth?

The stimpson’s goby (Sicyopterus stimpsoni) is the “Prince of Persia” of Gobioid fishes. Native to the Hawaiian and Society Islands, many species of goby climb waterfalls reaching tens of meters in height—but the stimpson’s goby takes it one step further.

Through locomotion known as “inching,” this finger-sized fish can climb waterfalls as tall as 100 meters (about 30 stories).

“For a human to go the equivalent distance based on body size, it’d be like doing a marathon, some 26 miles (42 kilometers) long, except climbing up a vertical cliff-face against rushing water,” researcher Richard Blob told Livescience.

It’s all possible thanks to a distinctive oral sucker that develops as the mouth shifts from a terminal position to a sub-terminal one. We’re talking cranial metamorphosis—in only two days. I mean. Come. On.

The freshwater whipray (Himantura dalyensis, formerly Himantura chaophraya) is one of the world’s biggest freshwater fish, and one of its biggest mysteries. These magnificent giants can reach roughly 16.5 feet  nose-to-tail. To put it into perspective, the average height of a wall in a United States home is eight feet. Look at the wall—now imagine a whipray that is twice as long as the wall is tall.

Giant whiprays inhabit the sandy bottoms of estuaries and large rivers in Thailand, Borneo, New Guinea, and northern Australia, and like our friend the sawfish, use an electrosensory system to prowl the riverbed for prey.

Little is known about this ethereal creature, and more research is needed to determine its habitat use and requirements, biological parameters, and major threats so that conservation efforts can be improved.

Now can I (in good moral standing) come up with a list of weird fish without including the infamous “penis fish?” I think not.

Native to the Amazon and Oranoco Rivers of South America, the candiru (Vandellia cirrhosa), or vampire fish, is perhaps the most notorious member of the family Trichomycteridae.

The tiny parasitic catfish has a voracious appetite for blood, and will often parasitize other fish by entering the gill chamber to satiate its hunger. This is where we run into problems. In order to locate the gill slits, the candiru hunts for streams of flowing water, which expel from the gills—streams not unlike those produced when naked humans (and not just men, mind you) urinate in the water.

When a stream is located, the candiru swims up and inside the available passage (be it the gill cavity of a fish, or the urethra of a human, or other animal). Once inside, it erects short spines from its gill covers which hold the fish in place while it uses needle-like teeth  to make an incision, and engorge itself with blood.

Yes, I know they included parrotfish in the original list. But while they did highlight parrotfish mucus, they forgot a tasty morsel of parrotfish information that warrants a second entry…

Parrotfish waste is largely made up of tiny grains of hard coral, which sinks to the ocean floor, and adds to the substrate. In other words? They poop sand. Lots of sand—to the tune of one metric ton per fish, per year. And this is not just any sand, but the beautiful, pristine, tropical, island-y, ermagerd-roll-in-it-white sand.

Just some food for thought for the next time you find yourself pulling the tiny umbrella out of your drink at a tropical destination. That beach you’re lying on? Well, everybody poops, even weird fish.