Any good field scientist needs a good camera. At the very least you have to document your sampling sites, record samples, and get good photographs of your methods for the inevitable presentations. A field camera needs to be compact, flexible, easy to use, light on batteries, and durable. Of course, the more advanced photographer may scale up to a robust Digital SLR, but at that point, you already know what you need. For the rest of us, a smaller point-and-shoot will suffice.

I shoot with both a heavy duty DSLR and a light-weight point-and-shoot, depending on the conditions, how much space I have available, and how much gear I have to lug around. When it came time to replace my 6-year-old point-and-shoot with something a little more modern, I wanted something that had more flexibility than the run-of-the-mill pointers while still being small enough to carry around in a pocket. I also put a priority on optical zoom (which is definately not the same as digital zoom). I chose the Cannon Power Shot SX130 IS. 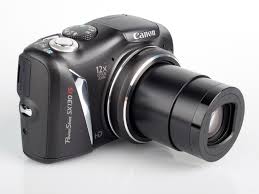 It’s a nice little camera, bigger than most pointers, but not so huge that it gets in the way, with a 12X optical zoom on a pretty nice lens (the additional digital zoom can get you up to 48X, but only looks decent on a tripod). An image stabilizer helps with unsteady hands. As far as features go, there’s a huge amount of flexibility and almost as many functions as a decent DSLR. It has a few bells and whistles such as color swapping, smile detection, fish eye, and a nice palette of different light qualities and white balances from which to choose (it also has the perplexing “Dark Skin Tone” and “Light Skin Tone” options, prompting @kzelnio to comment “dude, your camera is racist!”).

On to the drawbacks: Automatic mode is unimpressive, so if you’re the kind of person that doesn’t like fiddling with ISO, aperature, shutter speed, and various other features, than this probably isn’t the best camera for you. It does have an “easy” mode for full-proof shooting, which takes decent pictures and prevents your buddies from mucking up all you settings when you hand it off for the inevitable group shot. The macro setting isn’t anything special, so if you’re work involves lots of small things, you should look elsewhere (though to be fair, great macro photography usually needs a dedicated lens). There’s no viewfinder, which is annoying when shooting in bright light, but the LCD is big and crisp. Shooting video is comparable with a FLIP camera – nothing special, but decent.

It’s tough enough for a camera not marketed as such. It spent several weeks bouncing around in my pocket, got splashed a few times (but never submerged), was dropped, sat on, and exposed to plenty of dust without showing as much as a scratch. I had mixed results with batteries, regular Duracell batteries lasted about 5 hours of continous shooting, while the nice Energizer lithium batteries held out for over of week of sustained use. Taking AA batteries instead of fancy rechargables is a bonus when traveling places where electricity for recharging is not always an option. Turn the brightness down on the LCD for longer battery life.

Utility – 4/5 (an essential piece of kit, but a little fancier than necessary)

Durability – 3/5 (tough enough, but there are definately tougher point-and-shoots out there)

Comfort – 4/5 (If you’ve worked with a DSLR it will seem intuitive and simple, if not all the dials and buttons may be a mystery. The manual is excelent and thorough)

Statement of use: This camera accompanied me on a 3-week trek around India, where it suffered the slings and arrows of regular abuse, frequent dust, sand, being tossed around, and feeding it strange batteries that sort-of fit.

Below are some sample photographs shot with this camera: