Over Christmas, I finally got to tour the Ram Myers Center for Ocean Biodiversity Restoration captive breeding facility. The millions of gallons of saltwater tanks and the state of the art husbandry and genetics labs look like something out of Jurassic Park. The building itself is almost as impressive as the list of heavy-hitters who work for or consult with the Center, and they’ve had undeniable success with temperature-resistant reef-building corals and pH resistant shellfish and phytoplankton that can survive in our increasingly warm and acidified seas.

I was there to investigate their recently-announced efforts to de-extinct smalltooth sawfish by releasing captive-bred animals into the Everglades and the Bahamas. Once found as north as New York and as west as Texas, habitat destruction and bycatch caused these amazing animals’ range to shrink to one small part of South Florida by the late 1990’s. In the early 2000’s they became the first elasmobranch to be listed on the U.S. Endangered Species Act, and in 2027, they were sadly declared extinct in the wild. In the interest of transparency, I should say that I started my tour skeptical of the Center’s plans to de-extinct smalltooth sawfish, and my opinion remains the same after further investigation. 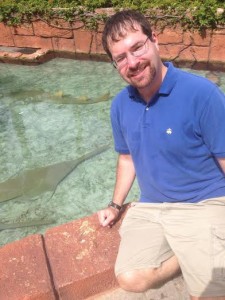 The author, playing with sawfish, circa 2013

There’s no doubt that the technology exists to create a relatively large population of smalltooth sawfish through captive breeding, certain numbers large enough to let the wild population re-establish itself. Though extinct in the wild, these animals do well in captivity and are found in aquariums all over the world, and they’ve been have been successfully bred in captivity since 2012  In fact, back in 2013 I got to see the first captive-bred smalltooth sawfish. Additionally, recent advances in cloning allow scientists and aquarists to further augment captive populations, made easier by the species’ inherent ability to reproduce through parthenogenesis . If the technology exists for certain other bloggers who shall remain nameless to clone animals that have been extinct for millions of years as a prank, then the technology certainly exists to augment captive populations of a species extinct in the wild but still found in aquariums and research facilities.

No, the problem isn’t the technology required to raise animals in captivity, the problem is what happens next. Recreating populations may be possible, but you can’t release animals into an environment that no longer supports their survival.  Smalltooth sawfish have very specific habitat requirements, and destruction of those habitats throughout their range directly lead to their extinction. Those problems haven’t been fixed since 2027; if anything, they’ve gotten worse. Sea level rise and warming seas have all but destroyed the few mangrove habitats left after a century of destructive coastal development. Simply put, we can breed and clone hundreds of smalltooth sawfish in captivity, but if we release them into their old habitat as it currently is, they’d go extinct all over again.

If we want to release sawfish (or any of the countless other animals that have been proposed for de-extinction) back into the wild, we first need to fix the conditions that led to their extinction. Restoring coastal habitats like mangroves won’t just make those areas more suitable for re-releasing sawfish. It will also result in restoring all the ecosystem services that mangroves used to provide, things like shoreline stabilization, filtration of runoff waters, and nursery habitat for countless species of fish and invertebrates. If we fix the conditions that caused sawfish to go extinct, maybe we can prevent a need for de-extinction technology for other species in the future.