Black Manta. Ocean Master. The Trench. Scavenger. King Shark. Toxin. The Fisherman. Aquaman has had some pretty memorable villains over the last 80 years. Also, the Fisherman. This is Southern Fried Science, a blog famous for two things – inspiring the world with our unique blend of marine science and conservation and doing horrible, horrible things to Aquaman.

Catch me flounder for I have finned. It has been 98 days since my last Aquaman is Awesome post.

Sure, Black Manta has some pretty sweet gear, a compelling back story that justifies his hatred of the Atlantean king, and he looks like he’s poised for some serious awesome during DC’s Villains Month. The Trench even appear to be able to utilize chemosynthesis, when they’re not trapping dogs in cocoons. You know where I’m going with this, don’t you?

That’s right. No matter how ridiculous Aquaman’s comic book foes become, you can bet all your clams I’ll find real marine organisms that would make equally amazing villains. Here’s eleven of them.

Meet Man-o-War, the colonial killer that understands the value of teamwork.

Imagine a super villain composed of thousand of individual organisms that form one giant super-organism. Rather than a body filled with vital organs, this villain can take massive damage without a loss of ‘self’, only to spawn new minions to replaced the damaged parts. Now give this deadly foe 60-foot long venom-filled tentacles whose sting brings excruciating pain. Such a villain would certainly assume the identity ‘Man-o-War’.

The Portuguese Man-o-War (Physalia physalis), arguably the best known of the siphonophores (it is a cnidarian, but it is not a jellyfish) possess tentacles that unleash an unbelievably painful sting, the weapon of choice for our newest menace. But the weapon does’t make the man (o-war), and our villain has a strategic secret. Man-o-Wars are not singular animals, they are a colony of highly specialized polyps — each one an individual animal that combines to form a deadly super-organism.

The pneumatophore is a polyp the creates a gas-filled bladder for flotation. This produces the distinctive ‘sail’ of the Man-o-War, a bilaterally symmetric air sac that allows the colonial to remain at the surface and provides some propulsion by catching the wind. The sail is not just a sac of air, it also has defensive capabilities. When attacked, the sail is able to deflate, allowing the colony to sink below the surface and avoid predators. The gonozooids, which occur in tight clusters, are responsible for reproduction. Man-o-Wars engage in both asexual and sexual reproduction. Young colonies can reproduce clonally by budding, but as the colony becomes more mature, that gonozooids become sexually differentiated and release eggs and sperm to form new colonies. The gastrozooid takes care of all the digestion-related needs and surround the dastardly dactylozooids. Finally, the dactylozooids produce 10-meter (or longer!) tentacles that capture prey and drag them towards the gastrozooids. This is some serious teamwork.

Man-o-War even has minions. The shepherd fish is immune t the stinging tentacles and hangs out within the tentacles. The fish gains the protection of its lethal ally while the Man-o-War gets to use the shepherd fish as bait to lure other fish into its deadly trap.

Imagine Aquaman facing off against a colony of polyps that combine to form a deadly super-organism with massive stinging tentacles. Siphonophores have no nervous system, so Aquaman’s fish-talking power are useless. No matter how many dactylozooids, gatrozooids, and pneumatophores he destroyed, the gonozooids are there, churning out more.

But Man-o-Wars are not without their own predators, the largest of which is the enormous, cnidarian nom nom-ing Leatherback Turtle. Despite their size, leatherbacks are the largest live sea turtle, they survive exclusively on large numbers of jelly-like organisms — to the tune of the equivalent of eating 16 cucumbers per day. Leatherbacks aren’t the only animals that prey on Man-o-War, the salacious siphonophore has many foes, two of which join this list as super-villains in their own right.

END_OF_DOCUMENT_TOKEN_TO_BE_REPLACED

Evolution is infinitely creative. Sometimes, amid the beauty and wonder, the awe that emanates from the shear power of natural selection, and the poetry of descent with modification, evolution produces something that terrifies. I am not talking about our natural predators, for whom fear is part of our evolutionary heritage, but rather creatures that appear as though they emerged from our darkest nightmares. But even our nightmares are limited by our finite minds.

Evolution has no such limits and the immense size and incomprehensible diversity of the oceans has produce animals that make us yearn for the comforting familiarity of the common Pumpkinhead. Submitted for the approval of the Midnight Society, I present six sea monsters that make their horror movie counterparts look tame:

1. These mind-bending tapeworms crawled straight out of Slither.

Here is a classic horror movie scenario for you: alien/parasite/mutant invaders enter your body, latch on to you brain, and take control, forcing you to do their bidding as they multiply and infect those around you. From Body Snatchers to Slither, mind-controlling parasites are a mainstay of the genre. But you’re a reader of Southern Fried Science. You already know all about barnacles that take over crab brains and induce sex-changes when necessary or fungi that invade ants and force them to climb to their doom. Mind control parasites aren’t really all that uncommon, but they mostly infect invertebrates. There aren’t any deadly mind-melting monsters that can take over us higher organisms, right? Right?!

END_OF_DOCUMENT_TOKEN_TO_BE_REPLACED

Evolution is the most creative force on the planet. Everywhere we look, we find species with novel and phenomenal adaptations that put their comic book brethren to shame. In no ecosystem is this more apparent than in the vast and unfathomable ocean. Marine species, especially those in the deep sea, have evolved to survive in a environment that is completely alien to us. Several months ago, I unveiled “Five organisms with real super powers that rival their comic book counterparts“, but that was just the beginning. Without further adieu, I give you 5 more marine organisms that put their superhero counterparts to shame (and one bonus critter).

The blind shrimp with super senses

In the deep sea, eyes are not among the most useful sense organs. While many deep-sea species have extremely reduced eyes, some have abandoned these organs entirely. Rimicaris exoculata is a shrimp endemic to deep-sea hydrothermal vents in the mid-Atlantic that is completely eyeless. Its carapace is smooth, without even a hint of reduced, vestigial eyes. This, unfortunately, is a problem because Rimicaris exoculata is a farmer. The blind shrimp grows bacteria in its gill chamber, bacteria that can convert the chemical-rich hydrothermal vent fluid into food for the shrimp.

For lack of a more descriptive adjective, hydrothermal vents are hot. Some can exceed 400°C. Rimicaris exoculata needs to get close to this hot vent fluid to feed its crop of bacteria, but not so close as to become a hydrothermal hors d’oeuvre. And so, the blind shrimp evolved a completely new light-sensitive organ mounted on the top of its carapace–the rhodopsin-rich dorsal eyespot.

The dorsal eyespot of Rimicaris exoculata doesn’t “see” in the normal sense, there is still almost no light in the deep sea. Rather, this shrimp is adapted to detect the black body radiation emitted by the hydrothermal vent. For Rimicaris exoculata, the deep sea glows with the light of super-heated hydrothermal fluid, allowing it to both find food for its bacterial crop and avoid getting cooked itself.

It should be no surprise that Rimicaris exoculata is undoubtedly the favorite deep sea organism of another blind champion with super senses–Daredevil.

END_OF_DOCUMENT_TOKEN_TO_BE_REPLACED 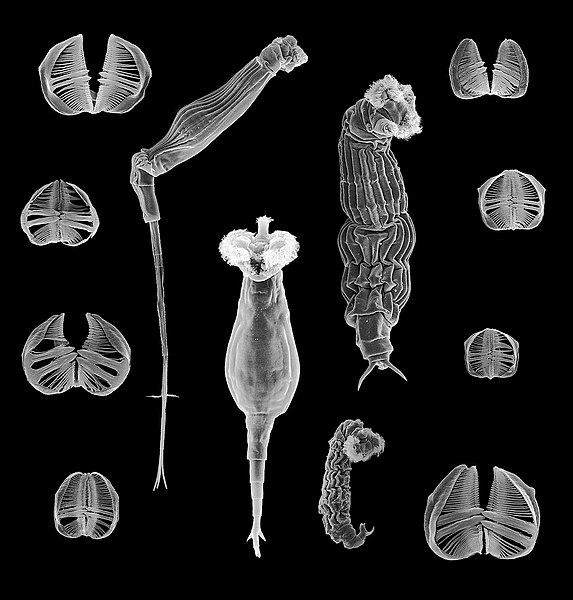