Readers of this blog are no doubt familiar with everybody’s favorite bone-eating, snot-flower worm and her harem of dwarf males. Osedax, a genus only discovered in the last decade, had risen to prominence as one of the major contributors to whale fall communities. Finding a dead whale in the deep sea, it turns out, isn’t much easier than finding a mate, so once a whale fall is settled, Osedax need to maximize their reproductive output before the food runs out. Several species of Osedax solve this problem by nurturing harems of parasitic dwarf males in their trunks. One study counted 111 males nestled inside the tube of a single Osedax female.

When I first wrote about rotifers in my super powered organism post, I compared them to Rogue from the X-Men, since they have the ability to absorb genetic materials from other species and acquire their abilities. I could have just as easily compared them to Wonder Woman, since, like the Amazons of Themiscyra, bdelloid rotifers decided that men just aren’t for them. The entire class excised males from their gene pool 80 million years ago.

4. Blue Whales (and many other whales)

You might think, if you adhered to a particularly toxic narrative of masculinity, that possessing the largest penis that has ever existed might place you at the pinnacle of your social hierarchy. Such is not the case for the Blue Whale, where sexual dimorphism favors the female. Female Blue Whales are, on average, 2 meters longer than their male compatriots. While little is known about Blue Whale social behavior, many other whale species form matriarchal pods. The core social group for killer whales is the matrilineal group (a collective of females and their offspring, often 3 generations deep). Sperm whales also form matriarchal pods, comprised of females and juveniles of both sexes, while bull sperm whales are either solitary or form small bachelor herds.

Can hermaphrodite species also have dwarf males? If they’re goose barnacles they can! Scalpellum scalpellum is a barnacle that is usually a hermaphrodite. However, when environmental conditions are right and the concentration of adult barnacles is dense, larvae that settle on already developed barnacles, will, instead of assuming both sexes, becomes dwarf males. Interestingly, while all S. scalpellum larvae have the potential to become hermaphrodites, only 50% are able to become exclusively male.

Wander along a sandy beach on the Atlantic coast and you will, undoubtedly encounter a wonderful little creature called the mole crab. Sometimes called sand crabs or sand fleas depending on where you are from, anomurans in the genus Emerita are fascinating creatures that hold a very special place in my heart (my first scientific paper was on the circatidal rhythms of Emerita talpoida).

If you find a mole crab larger than a few centimeters, congratulations, you’ve found a female. If you have a good dissecting microscope and a little curiosity, you can lift up the telson and look for her reproductive gonpods. You may also notice a few small critters that many students first mistake for juvenile mole crabs. These are a special kind of dwarf male–neotenous males. Neotenous males retain many of their juvenile features. Among mole crabs, these neotenous males hang out beneath the female’s telson, close to her reproductive organs. Like the anglerfish, the females are not monogamous.

Ostrea puelchana is a South American oyster with a reproductive strategy known as rhythmic successive hermphroditism. Larvae settle and, after about a year, become sexualy mature males. Then, as they continue to develop, they turn into hermaphrodites. Finally, they end their several year life as females. But not all Ostrea get to enjoy life as a rhythmic successive hermaphrodite. Once again, we’ve encountered a species with two, separate reproductive strategies. Ostrea puelchana also possess neotenous dwarf males.

These dwarf males only live for about a year, and they are only found attached to 17% of adult Ostrea. Unlike goose barnacles, it appears that the dwarf males can only reproduce with exclusively female individuals, not hermaphrodites. Interestingly, when adult density increases, the number of females decreases. So, in this case, a higher density of hermaphrodites is a reproductive advantage when the population is large–twice as many partners to spawn with–but when the population is small, having dedicated males attached to your shell increases the odds of successful reproduction.

One of the great challenges in writing a good scientific paper is composing a title that is both informative, comprehensive, and compelling. The Drs. Knoflach and van Harten pulled off this hat-trick with their paper on Paper Nautilus reproduction: Tidarren argo sp. nov. (Araneae: Theridiidae) and its exceptional copulatory behaviour: emasculation, male palpal organ as a mating plug and sexual cannibalism.

Paper Nautlii are a fairly enigmatic species with a rather brutal reproductive cycle. The male nautilus has a gonopod–a reproductive tentacle–which is placed in contact with the female epigynum–an external gential structure. Upon contact, the female simply rips the gonopod off the male. The gonopod continues to function for several hours, during which time it acts as a genital plug, preventing other males from mating with her. Fortunately, the male doesn’t have to worry about regenerating his gonopod, since we have now reached the “sexual cannibalism” portion of the program.

Wood-boring molluscs are a group of bivalves that survive either directly or indirectly on wood decomposition. They can be found in both shallow and deep-sea ecosystems. For at least two species, the seagrass-dwelling Zachsia zenkewitschi and the deep-sea Xylophaga supplicata, they can also be found comfortably nestled in the pouches of other wood-boring molluscs. That’s right, once again we have some lovely parasitic dwarf males.

For Zachsia, the males enter the females as larvae, and then grow to maturity within specialized pouches. They are only about 1 mm long. Xylophaga has a more interesting story, since, at first discovery, it was presumed that these reduced males were actually juveniles being reared in a brood pouch, rare for a bivalve. It was only recently discovered (as in, this year) that these were actually dwarf males***. 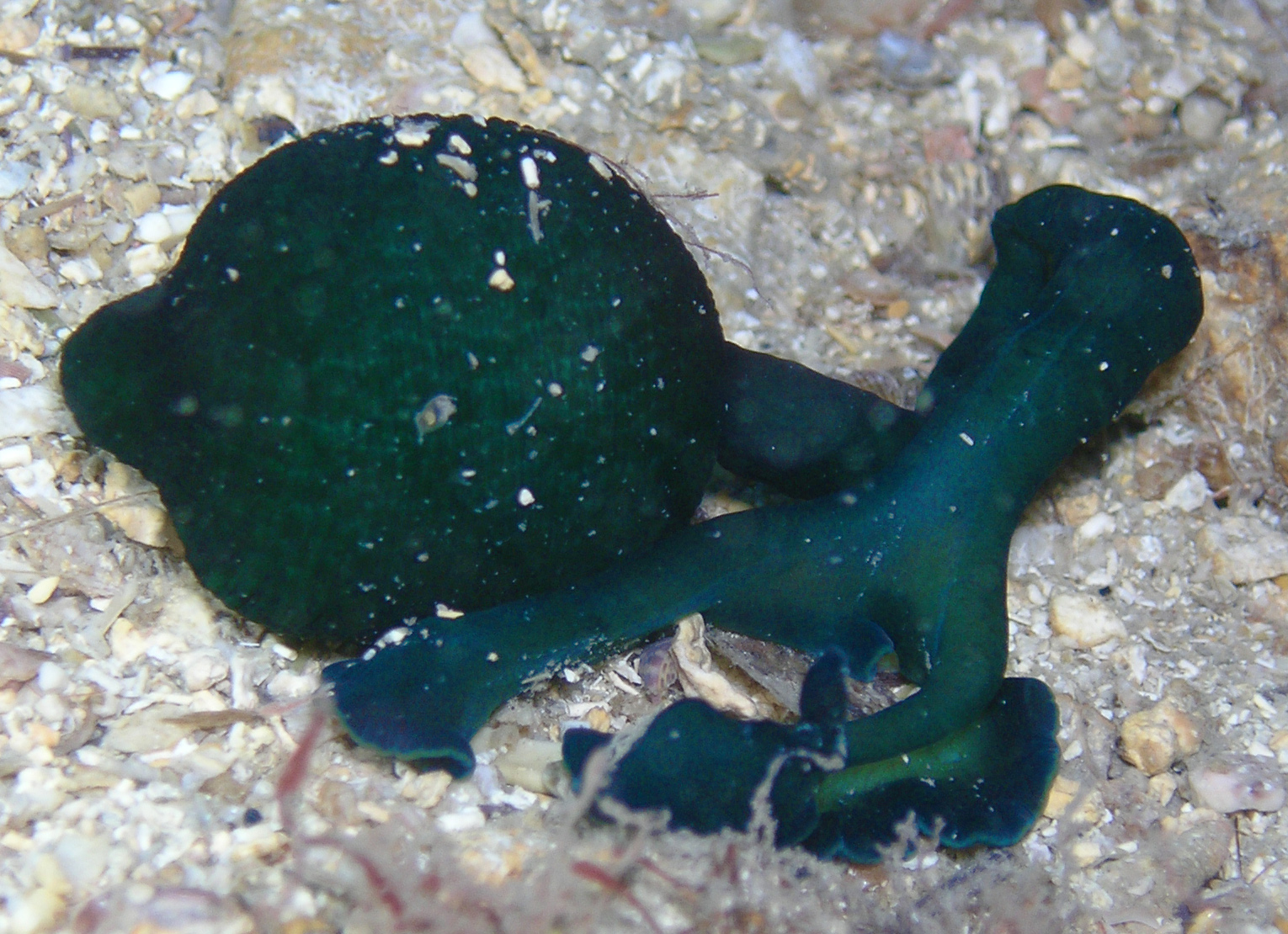 The green spoonworm is one of those creatures that looks absolutely stunning on the seafloor, but quickly loses it aesthetics when brought to the surface. Bonellia viridis is an echiurin that lives in deep-sea sediment throughout the world. As a larvae, it is sexually undifferentiated, where it settles determines its sex. If the spoonworm larvae lands on the seafloor it becomes female and begins to secrete a potent toxin called bonellin. Should the larvae come in contact with this toxin, it will be masculinized and sucked into the spoonworm’s body through her feeding proboscis, where it will be absorbed into her genital sac and spend the rest of its life producing sperm.

Bonellin isn’t just used for sex determination, however. This chemical, which is also the cause of the spoonworm’s beautiful green coloration, is an incredibly potent biocide, capable of killing bacterial, animal larvae, and even red blood cells. Because this potent toxin is photosensitive, it’s currently being investigated for it’s potential as a targeted anti-tumor drug. Which means that, should it prove effective, one day we might attribute a successful cancer treatment to the sex lives of spoonworms.

So why are there some many different ways to be a parasitic or dwarf male and why are female dominated communities so common in the natural world? The general paradigm is that, evolutionarily  males are cheap and females are expensive. Females tend to bear the brunt of energetically expensive processes such as producing eggs, gestation, and rearing offspring, while males only need to provide genetic material. With more social animals, like whales, females tend to be the only ones that can retain lineage fidelity–they know who their offspring are while most males don’t. Obviously, this isn’t true in all cases, since there are as many different ways to have sex as there are species that do it.

One thing is certain, when you look at biology—when you look at the natural world—the roles of a male and a female in society and in other animals, there is no such thing as a “typical role”.

*by terrific, I mean terrible

***incidentally, I don’t have full access to this paper, so authors, if you want people to cover your research in detail rather than just saying “they found dwarf males”, publish open access.